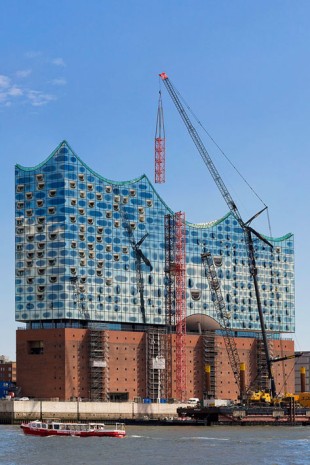 Almost finished: Thömen’s LTM 1750-9.1 removes the last construction crane from the Elbe Philharmonic Hall in the Port of Hamburg with an impressive hook height of 127 metres.

The Elbe Philharmonic Hall, a future concert hall and architectural highlight in the Port of Hamburg, can now be seen without any construction cranes for the first time since building work began in 2007. Hamburg-based crane and heavy haulage contractor Thömen used a Liebherr LTM 1750-9.1 mobile crane to dismantle the last of the four large top-slewing cranes which for years have dominated the skyline at the former quay warehouse. A demanding job completed in front of an imposing harbour backdrop.

The dismantling work had to be completed by a powerful mobile crane from a fixed jack-up platform since the crane was directly attached to the building and was around 120 metres high. It had been climbed downwards until the boom could just still be slewed over the edge of the building.

The nine-axle LTM 1750-9.1 was erected and prepared for the job at Burchardkai, in the west of the Port of Hamburg, on a jack-up platform measuring 75 metres in length.

114 tonnes of ballast, a 19 metre telescopic boom extension and a 66 meter luffing jib were required to achieve the required hook height of 127 metres. Two tugs towed the platform with the crane around ten kilometres upstream through the Port of Hamburg for around one hour to the site.

Immediately in front of the Elbe Philharmonic Hall, the jack-up platform pushed its enormous legs into the river bed to raise the platform to the water level of the high tide. This meant that the crane work could be completed without any hindrance from the tides or the bow waves from passing shipping.

The two crane drivers had to exercise great caution and work very precisely when dismantling the crane which was just three metres away from the glistening glass façade of the concert hall.