Global iron ore shipments were in line with 2015 full year guidance of around 340 million tons. The strong second half performance was achieved following completion of the brownfield developments and expanded infrastructure in the Pilbara, enabling a drawdown of inventories, as well as improvements at Iron Ore Company of Canada.

For Rio Tinto, global iron ore production in 2016 is expected to be around 350 million tons.

“Against a challenging market backdrop for the industry, Rio Tinto remains focused on operating and commercial excellence to leverage the low-cost position of our Tier 1 asset base,” Rio Tinto Chief Executive Sam Walsh said.

“In 2015, we delivered efficient production, meeting our targets across all of our major products, while rigorously controlling our cost base. We will continue to focus on disciplined management of costs and capital to maximize cash flow generation throughout 2016.” 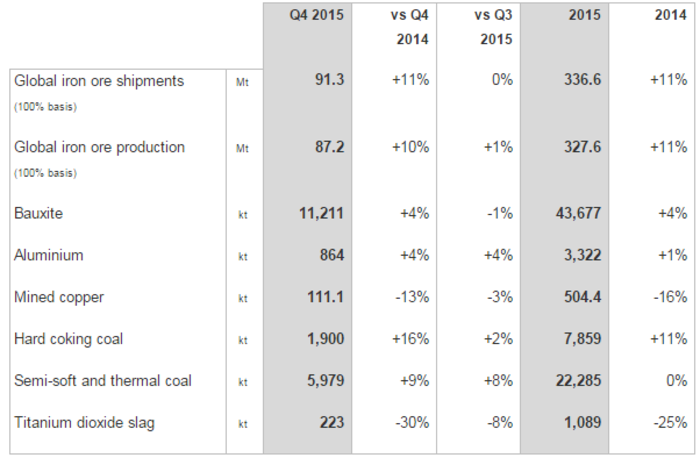 Aluminium production was in line with 2014, with record annual production at nine smelters offsetting lower production from Kitimat as the modernized and expanded smelter was commissioned.

Diamonds & Minerals continues to optimize production to align with market demand, reflected in a 25 percent reduction in titanium dioxide slag production compared to 2014, in line with guidance.

Last week, Walsh acknowledged the challenging commodities market and said it would freeze salaries for all staff in 2016. “The pressure this is placing on our industry is significant and it is a tough time across the sector,” Walsh said. “It is important we recognize that the pressure isn’t going to let up. This situation is not temporary.”