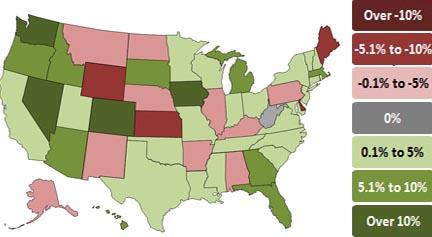 Only 23 states and the District of Columbia added construction jobs between September and October while construction employment increased in 35 states between October 2015 and October 2016, according to analysis of Labor Department data released by the Associated General Contractors of America. Association officials said declining public-sector investments in infrastructure and other public projects were undermining construction employment growth in many parts of the country.

“Firms that perform public-sector work are having a hard time finding enough work to keep their teams together,” said Ken Simonson, chief economist for AGC, noting that public-sector spending on construction is down 2.2 percent for the first nine months of 2016. “These firms would definitely benefit, and be able to handle, the kinds of infrastructure investments the President-elect and Congress have been discussing.”

Construction employment declined in 23 states during the past month and held steady in four other states.  Illinois shed more construction jobs than any other state (-3,300 jobs, -1.5 percent. Delaware lost the highest percentage of construction jobs between September and October (-2.8 percent, -600 jobs), followed by Mississippi, Idaho (-2.6 percent, -1,100 jobs), Oklahoma and Iowa.

AGC said that even as many firms that perform private-sector work are having a hard time finding qualified workers, many firms that rely on public-sector funding to build roads, bridges and other public infrastructure are more worried about finding work.  They urged President-elect Trump and the incoming Congress to act quickly to pass a multi-year infrastructure program and find sustainable ways to pay for future improvements as well.

“The new administration has a unique opportunity to put more people to work in high-paying construction jobs and rebuild the public infrastructure that is critical to our continued economic vitality,” Stephen E. Sandherr, chief executive officer for the association, said.