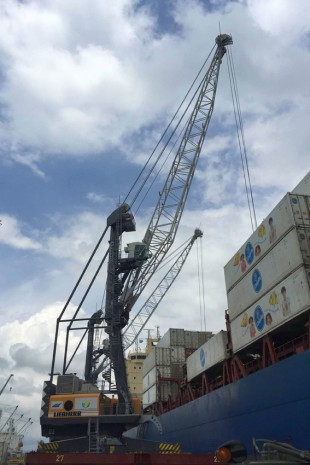 Three LHM 420s have been handling containers in Guatemala since 2014.

The most sought-after LHM model in Latin America over the past five years, type LHM 600, is still in high demand. In Buenos Aires, Argentina, Terminal 4 S.A. invested in an LHM 600, which is their seventh LHM already. In the upcoming months, two further LHM 600s are going to be delivered to the South American Pacific coast where Puerto Lirquén in Chile is expanding its Liebherr mobile harbour crane fleet with their seventh and eighth unit.

In Brazil, an LHM 550 started operation for Termaco in Fortaleza this summer. It is the first LHM for the company. In Jamaica, Kingston Wharves Limited also opted for an LHM 550. The new crane is the first Liebherr mobile harbour crane in Jamaica. Liebherr received another initial order from Suriname. An LHM 280 started operation for N.V. VSH Transport in Paramaribo in summer 2015.

A newly built port in the Caribbean is the first LHM customer in Haiti. In June 2015, Port Lafito received its first mobile harbour cranes. The port opted for two LHM 420s. The crane drivers benefited from simulation-based training programs which are offered in the Liebherr maritime training centre in Miami, USA.