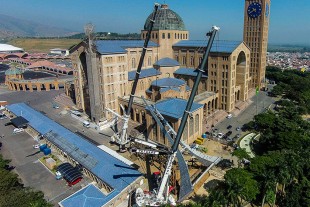 Liebherr mobile cranes LTM 1750-9.1 and LTM 1500-8.1 are used in the installation of the metallic structure of the bell tower of the second largest catholic temple of the world

Two Liebherr mobile cranes were used in the assembling of the metallic structure of the bell tower of the National Sanctuary of Nossa Senhora Aparecida, in São Paulo (Brazil). The Sanctuary in the city of Aparecida is the second largest catholic temple of the world, behind only of Saint Peter’s Basilica, in the Vatican. The operation was made by the contractor Guindastes Tatuapé, and it is part of the preparations for the 300th anniversary of the founding of Nossa Senhora Aparecida statue, in the river Paraíba do Sul. The anniversary will be celebrated in 2017.

The metallic structure of the bell tower has 36 meters height and weighs approximately 97 tonnes. To lift the structure, it was first positioned horizontally and one of the sides of its base was fixed with two rods that would articulate as the structure was raised. Three other anchorage points were settled: one in the head of the structure, from where the LTM 1500-8.1 lifted the the piece and two on the other side of the base that was held by the LTM 1750-9.1.

When the operation began, Liebherr 500-tonnes crane slowly raised the structure, leading it to the vertical position, lifting it by its head. When the boom reached 39 meters radius, the weight was displaced to the 750-tonnes crane, which was moored in the base. By the end of nearly two hours the operation was completed.

The bell tower will hold 13 bells. Each one of the bells is dedicated to one apostle – and also honours Cardinals, Bishops and Archbishops related with the encounter of Nossa Senhora Aparecida statue. The 13th bell – the biggest one – is dedicated to the Virgin of Aparecida and to São José.