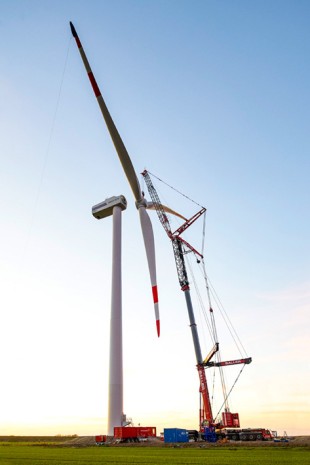 The Liebherr LTM 1750-9.1 mobile crane installed the rotor star at a hub height of 80 metres.

Kran Saller GmbH based in Deggendorf in Bavaria, recently erected five wind turbines in five weeks at a wind farm in Dagebüll, Germany, near the Danish border.

The LTM 1750-9.1, which Saller took delivery of at the Liebherr plant in Ehingen in summer 2014, has already excelled on many occasions with its high capacity and efficiency for the erection of wind turbines. A few weeks ago the 9-axle mobile crane from Bavaria travelled to Northern Friesland to a wind farm in Dagebüll. Once there, within just five weeks it had erected five wind turbines manufactured by Senvion, each with a capacity of 3.4 MW. Seven components had to be installed on each turbine. The heaviest component at 61 tonnes net weight was the rotor star which had to be installed at a hub height of 80 metres. The LTM 1750-9.1 hoisted this load to a hook height of 90 metres with a radius of 20.5 metres. To tackle this job the 750-tonne mobile crane was equipped with telescopic boom guying, a 15-metre V2 telescopic boom extension, a 35-metre luffing jib and 144 tonnes of ballast.