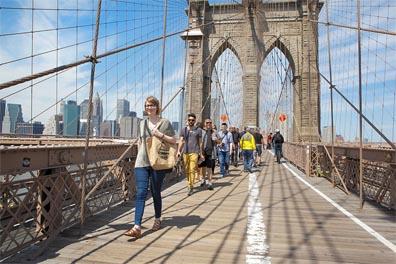 Behind schedule and still not finished, Brooklyn Bridge cost overruns due to what the New York Mayor’s Office of Operations calls “unforeseen field conditions” might wrap up in April 2017.

“Big public projects take too long to complete and routinely run over budget,” said Maria Doulis, an analyst for the watchdog Citizens Budget Commission. “The city has made attempts to be more transparent about this by posting information online, but it’s unclear what actions are being taken to evaluate and address the root causes.”

Doulis also said the city needs Albany to grant the Transportation Department design-build authority, which she claims would save money and accelerate construction work. The CBC estimates the city could save as much as $2 billion over 10 years if it had the same authority the state has for managing bridge construction.

As it stands, New York taxpayers are responsible for 54 percent of the bridge work with the rest of the funding coming from the federal government coffers, according to Department of Transportation officials.

Last August, the DOT spent $370,000 to do a feasibility study on possibly expanding the bridge’s pedestrian pathway to alleviate increased foot and bicycle traffic.

However, DOT commissioner Polly Trottenberg said that the study was simply the first step in determining how the bridge could be made more accessible and no plans are set. “Every time we touch this 133-year-old bridge, it tends to be costly and complex,” she explained.