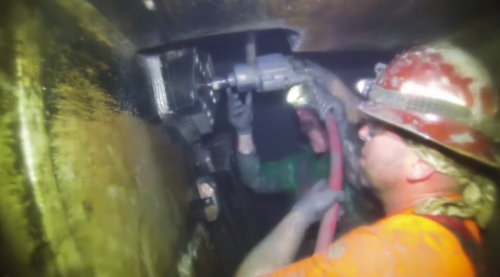 The Alaskan Way Viaduct Replacement Program’s State Route 99 under downtown Seattle has less than 1,600 feet to go and Bertha, the gigantic (but beautiful) tunnel boring machine should see daylight in late May, according to the Washington State Department of Transportation.

Bertha is not only underground, she’s also underwater. Here’s a look at the pressure the workers and machine face daily.

Soil settlement has been “negligible” and there was no need to inject any grout to reinforce buildings or streets, said WSDOT spokeswoman Laura Newborn. The ground along the tunnel route remains stable as Bertha pushes toward the finish line near Seattle Center. Up next for Bertha: a trip beneath Fifth Avenue and the Seattle Center Monorail. The top of the machine will pass approximately 90 feet below the Monorail’s supports.

While crews inside the tunneling machine are focused on mining, separate crews are hard at work building the double-deck highway inside the tunnel. The new roadway now stretches more than 3,800 feet into the tunnel, near the southern edge of Pike Place Market.

Work has also begun on the mechanical, electrical and plumbing systems within the tunnel. Crews began installing these systems near the stadiums last week and will continue to progress north, even after the tunnel drive is complete.